Establishment of ITM Motive and Appointment of Managing Director

ITM Power (AIM: ITM), the energy storage and clean fuel company, is pleased to announce the appointment of Duncan Yellen as Managing Director of ITM Motive, the division of ITM Power responsible for the UK build, own and operate portfolio of hydrogen refueling stations.  ITM Motive will be established as a separate, wholly owned subsidiary for the management of the Company’s refueling assets.

Dr Duncan Yellen (54) has had a 30 year career in the energy and environmental sector. Prior to joining ITM Motive, Duncan was most recently M&A and Business/Project Development Manager at Storengy, a wholly owned subsidiary of Engie, where he was responsible for identifying new business streams and successfully developed its business strategy in green gases, CNG and geothermal. From 2012 to 2018  he was Head of Consulting for EA Technology Ltd, managing a team of 40 consultants.  Duncan’s early career was with National Power in the UK and with British Gas in various technology and business development roles. Duncan has an MBA from Bradford University a PhD in Materials Science and BSc in Physics from Liverpool University.

On establishment, ITM Motive will own and operate a network of eight publicly accessible hydrogen refueling stations, which will expand to 11 by the end of 2020. Each incorporates an ITM Power electrolyser and a Linde IC90 compression, storage and dispensing system. ITM Power has successfully sourced both UK and EU funding to support the build and deployment costs, and developed a siting agreement with Shell for deployment on their forecourts in the UK. The Company has demonstrated (in close collaboration with Linde) a world class station availability of 98 per cent which is encouraging further fuel cell electric vehicle (FCEV) roll out in the UK.

ITM Motive’s sites in the UK continue to be operational as part of the essential services provided during the current lockdown, refueling vehicles for the Metropolitan Police and Green Tomato cars (which is providing transport for NHS staff) among others.

Dr Graham Cooley, CEO of ITM Power said: “We’re delighted to have been able to recruit Duncan to be ITM Motive’s Managing Director.  He has exactly the right mix of relevant experience and entrepreneurial ability to develop the business’s portfolio and drive it to profitability.”

Dr Duncan Yellen added: “This is an exciting role with a company in the vanguard of the hydrogen revolution.  The UK has the opportunity to become one of the world leaders in the transition to zero carbon energy and fuel.  Transport needs to decarbonise and I look forward to helping cement ITM Power’s position at the forefront of this change.”

Jon Hunt, Toyota’s Manager of Alternative Fuels commented: “As well as providing world leading electrolyser technology ITM Power has pioneered the development of the UK hydrogen refueling infrastructure which has allowed Toyota and others to make the UK one of the first countries to benefit from this clean energy. The creation of ITM Motive with the appointment of the experienced Duncan Yellen as MD to focus on this area demonstrates the shared commitment to make the UK a leader in this technology and enable the country to reach its carbon reduction and air quality targets. We welcome this development and look forward to continuing our close collaboration with the new business”.

About ITM Power plc
ITM Power plc manufactures integrated hydrogen energy solutions for grid balancing, energy storage and the production of renewable hydrogen for transport, renewable heat and chemicals. ITM Power plc was admitted to the AIM market of the London Stock Exchange in 2004.  In October 2019, the Company announced the completion of a £58.8 million fundraise, including a subscription by Linde of £38 million, together with the formation of a joint-venture with Linde to focus on delivering renewable hydrogen to large scale industrial projects worldwide.  ITM Power signed a forecourt siting agreement with Shell for hydrogen refuelling stations in September 2015, (which was extended in May 2019 to include buses, trucks, trains and ships) and in January 2018 a deal to deploy a 10MW electrolyser at Shell’s Rhineland refinery. ITM Power announced the lease of the world’s largest electrolyser factory in Sheffield with a capacity of 1GW (1,000MW) per annum in July 2019. Customers and partners include Sumitomo, Ørsted, Phillips 66, National Grid, Cadent, Northern Gas Networks, Gasunie, RWE, Engie, BOC Linde, Toyota, Honda, Hyundai and Anglo American among others.

A History of Hyundai and Fuel Cell Technology 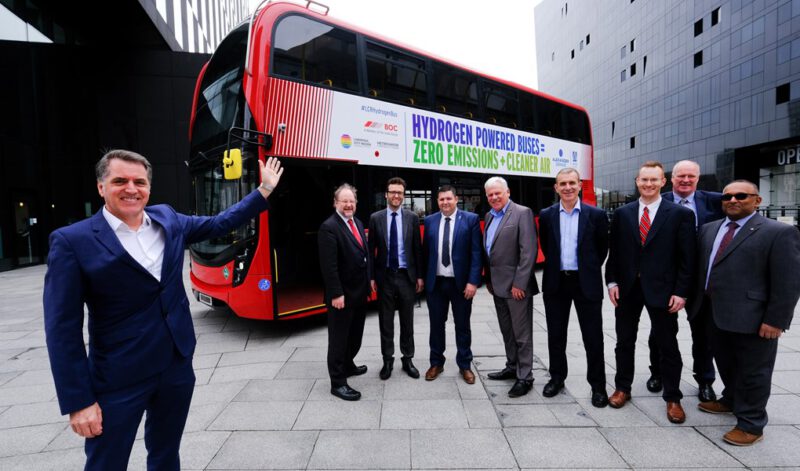